Katerina Kittycat is a character in Daniel Tiger's Neighborhood and Daniel’s other best friend. Katerina is shown to love playing dress up and pretend, but likes ballet the most. When she likes something or is excited about something she will often twirl. Katerina is the daughter of Henrietta Pussycat, who appeared in the Neighborhood of Make-Believe in the long-running series "Mister Rogers' Neighborhood". Henrietta had since grown up and has her daughter. They both live in a tree along with their neighbor O the Owl and his Uncle X.

Katerina is an imaginative young female kitten with white fur with gray stripes. She wears a light and dark green knee-length dress with yellow buttons, a light green bow tie on her head, a pale yellow camisole, pink panties, white ankle-high socks and green and white sneakers with yellow colored laces. She wears a variety of different apparel outlined in the gallery below. When Katerina is at the beach, she wears a green two piece bathing suit, that is tutu like, and had a pink bow on the middle of it. (Like her tutu)

Katerina dressed as a firefighter

Princess Katerina of the Neighborhood of Make-Believe

Katerina Kittycat In Her Winter Clothes

Katerina Kittycat Was A Super Ballerina

Katerina Kittycat Was Dancing In 2017 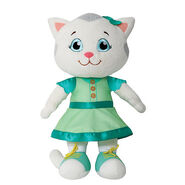