All Aboard is the second half of the twenty-fifth episode in the first season of Daniel Tiger's Neighborhood. It premiered on May 20, 2013, along with Daniel Uses His Words.

Katerina learns people can't help her if they can't understand why she is upset.

Daniel Tiger is at school playing train and is joined by Katerina Kittycat who helps him put the train parts in order. Daniel make-believes that he is an engineer on a real train.

When he goes to play with the train engine, he finds that Katerina is already using it. This is frustrating for Daniel, especially after Katerina takes the engineer's hat from him. Teacher Harriet reminds Daniel to use his words and he is able to clearly express his feelings. Katerina understands and agrees to let Daniel be the engineer while she will be the caboose.

The "train" heads for the jungle where Daniel and Katerina find O the Owl reading a book about trains. They decide to load up the train with stuffed animals. Katerina wants the train to be for monkeys only but Daniel continues to load the train with animals of all kinds. When Katerina gets upset with Daniel, she is encouraged to use her words as well. In doing so, she is able to tell Daniel how she fells. Unaware that Katerina wanted to train to be for monkeys, Daniel agrees that a monkey train sounds like a great idea! 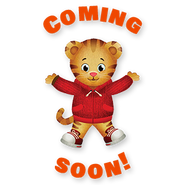